The Southwest corner of Ireland is one of the most temperate places on the island since it is saddled by the gulf stream and as a result this area attracted the attention of an array of interlopers over the centuries.  The British introduced golf to this area as early as 1889 under the aegis of the Waterville Athletic Club in the form of a crude 9 hole golf course.  But the area did not prosper into a real golf destination until the 1960s when an Irish born American named John Mulcahy decided to introduce the most testing golf links in Ireland to the Ring of Kerry.  He teamed with Eddie Hackett, the most accomplished links designer of his time, and Claude Harmon, a past Masters Champion and head professional at Winged Foot in the United States.

The front nine was reconfigured and expanded to create the current outward half and inward nine was built on the more exposed and rugged ground which gives this links it’s unique character.

The course flourished under Mulcahy’s direction over the next fifteen years as well as the influence of their long driving professional Liam Higgins.  The sixteenth is named Liam’s Ace for the distinction of him having made a hole-in-one on this testing par 4.  The seventeenth is called Mulcahy’s Peak for the back tee on this panoramic par three gives one the sensation of being on top of the world.

Over the years great champions like O’Meara, Woods, Stewart, and Els have played this course in preparation for the Open Championship.  Payne Stewart in particular took interest in the place and was named Captaincy of Waterville just before his tragic death in 1999.  The life size bronze statue of him stands behind ninth green as testimony to the special bond created with Waterville.

In 2003-04 the club commissioned Tom Fazio to do some major changes to the course.  The major change was replacing 6 and 7 with two new, far more interesting and challenging holes.  A number of greens were re-sited-including 16-Liams Ace-and new dunes and shell bunkers were woven into existing landscape to make a number of the holes more tactical and interesting to the eye. Actually looks quite original and makes the course that much better.

This is one of the windiest golf courses you will play in Ireland but the weather is usually temperate so the conditions are always tolerable.  Because of the temperate climate you actually will see a few Palmetto trees adorn the course-it seems like an aberration but the warm gulf stream wind is part of the weather patterns.  But weather aside this is one of the most challenging links courses in the country.  It has everything you want in a links layout-serpentine holes wending through tall, intimidating dunes.  Severe fall offs in the green complexes and large, swift, undulating putting surfaces that will challenge your mind.  I do not think you can appreciate the severity of the terrain until you get into the more rugged ground on the back nine.  But the walk down the fairway of the par five 11th-called Tranquility-will make it very evident to you how sublime and intimidating this course can be.

Don’t miss the memorabilia on the walls of the clubhouse or the bronze putting figure of Old Master next to the practice green.  It all part of the pure links ambiance of this wonderful destination.

This is a blue collar quirky links course that is nothing short of enchanting. As with so many of the old links courses Lahinch is embedded in a quaint summer resort town-complete with the “vacation trailer park” and probably a carnival midway if you come in the right time of the summer.  It sits just a few miles down the road from the famed Cliffs of Moher, Ireland’s version of Mt. Rushmore without the faces.

The village has that quaint Irish seaside character and the course holds a very special place among the great links of Ireland.  This is not a rich man’s golfing ground-it is everyman’s golfing ground where all are welcome as long as they love to play golf.

18th Hole and The Town (Photo from http://www.golfclubatlas.com)

The collection of holes is quite remarkable-the original routing was done by none other than Old Tom Morris at the end of the 19th century.  But what we see today are the refinements done in the late 1920’s by the esteemed Dr. Alister MacKenzie who designed Augusta National and Cypress Point. There are simply holes here the likes of which you will not see elsewhere.  Largest sand hills in Western Ireland except for the back side at Tralee-when my wife first saw the golf course from the edge of town her response was “what golf course”- the players and the greens just seem to be dwarfed by the grandeur of the hills.  Now add to the mix windswept hard undulating greens, real Mackenzie bunkering-strategic and intimidating, exposed windy conditions, and an occasional rain squall and you are in for a day of golfing challenges that will thrill and enthrall.

There is certainly no pattern to the routing of the course, you play a five par with a mountain in the middle of it followed by a three par where the green is hidden between two mounds that will remind you of some Grand Old Opry cleavage.  Pay attention on this tee because the driving area of the finishing hole literally crosses the driving line toward this green.  The next hole has a bunker in the middle of the driving area in which you could hide a herd of very large circus animals (6th hole shown above).  And so it goes-one very interesting, very quirky, and very challenging hole after another.  When you are done playing this course the first time you cannot sort out the holes in your mind-it is like a Rorschach Test with grass.

The course was renovated in 2002 and they have added and substantially changed a good number of holes.  To my eye a brilliant rehab job-the new holes are a wonderful fit-you would not know the additions were not original if you had not played it before.  The modifications just strengthen the character of an already strong test. 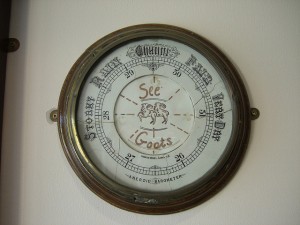 And don’t start your day without consulting the town meteorologists-take a look at the goats on the hill above the first tee-if they are scattered about the weather will be fair-if huddled take the umbrella and rain pants.  Rain or shine or both, you are in for a real golfing thrill ride this day.

This course is owned and operated by Pat Ruddy and his family and, as one of the premier modern architects in Ireland, Pat has created here his personal testimony to golf course architecture.  If you know anything of the man, Pat is a bit obsessed with the a traditional spartan approach to course presentation-no yardage markers on the course,  a yardage book without  user friendly features, and actually twenty holes to play.  When I asked his son who runs the golf shop about the “twenty holes” he simply said, the rest of the world will catch on eventually.  He even provides a cursing stone next to the 10th fairway.  In Katharine Dyson’s review of this course she explains that legend has it you can put a curse on a person or thing if you revolve the seven small stones on the top of the rock in a counter-clockwise direction.  I am guessing an inordinate amount of these have been heaped upon our host.

The yardage book reveals Ruddy’s respect for links golf design.  As he says, “The links have been designed to perpetuate and modernize the traditional values of links golf.  The combination of rugged dunes, deep bunkers, sea breezes, and large undulating greens calls on the golf to display strength of character, an ability to think, and shotmaking skills.”  The design makes generous use of “calculated deception aimed at inducing white knuckles on the club” in an effort to play with the golfer’s mind and impinge his effort to swing out and hit precise shots.

This is a knock your socks off track-very difficult-not for the faint of heart.  Breathtaking vistas, cleverly placed bunkers, huge rolling greens, and the links type serpentine tracking along the coast built on true links land.  Straight driving off the tee is essential to handle quite a bit of optical illusion created by the tall dunes and long corridor fairways.  Proper fairway positioning is crucial to get the most advantageous angle and some very difficult green complexes.

Since over ten of the holes are in breeze shot of the Irish Sea the wind influence is significant.  This leads to a couple of weather changes a round so be prepared for lots of dressing and undressing of your fair weather gear.  The good news is that like most links courses there is open access to most of the greens.   When the wind is up, and that is most of the time, the bump and run becomes a very effective method to getting your approaches close to the flag.

Sometime in the early 2000’s Pat must have intercepted a freight ship full of pressure treated railroad ties because the bunkers have more vertical sleepers than any Pete Dye course I have ever seen.  I think Pat has fire extinguishers placed throughout the course in case a contagious sleeper fire should break out and threaten to burn down the course.  This look of the vertical sleepers makes deep bunkers even more intimidating by articulating the potential pitfalls to the player from a long way out.

My favorite Pat Ruddy touch is on the scorecard where at the bottom next to the total score he has a huge oversized box which is simply labeled “What My Score Should Have Been”.  It is clearly his testimony to the delusional nature of all golfers who love to tell big fish stories over a Guinness after the round.