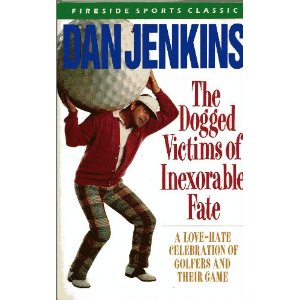 It is easy to have a Dan Jenkins section in your personal library since he has been a prolific sports/golf writer for over a half a century.  He has put out countless entertaining books-both fiction and non-fiction-written in his Texas wise-guy cynical and satirical style. The writing is always observant, to the point, and almost merciless in a kind of arms length critical view.

This particular collection of sixteen short pieces was published in 1970 and it covers the full range of golf matters of the time. Unlike today where the writers have to beg for interviews, Dan Jenkins lived with the protagonists week-to-week-traveling, playing cards, drinking beers, and sharing stories. As a result, there was a level of trust and confidence developed between them that offered a clear window into the hearts and minds of the players of the day. In reading this you feel you are getting an insider’s perspective on the development of the game in a golden era.

The name of the book comes from a Bobby Jones quote on the topic of competitive pressures in golf-whether for a championship or a Sunday Nassau.  Jones once wrote,
“On the golf course, a man may be the dogged victim of inexorable fate, be struck down by an appalling stroke of tragedy, become the hero of unbelievable melodrama, or the clown in a sidesplitting comedy-any of these within a few hours, and all without having to bury a corpse or repair a tangled personality”.  Jenkin’s writings bears out how human drama defines the game as guys try to excel at an individual sport that will expose every weakness in technique or resolve in a remorseless competition.

I have recently re-read this book and I found that the subject matter he writes about seems timeless-municipal golf, slow play, head cases, television, majors, the greatest to ever play the game.  The issues today are the same as they were in the 1960’s, the names have just changed to protect the innocent.

There is a wonderful chapter about a regular on the tour who you barely know about-George Low.  He was a journeyman pro in the 30’s and 40’s who realized with the proper balance of schmoozing and familiarity he could make a life for himself without lifting a club.  As Jenkins says, “He was America’s guest, underground comedian, consultant…….a man who conquered the two hardest things in life-how to putt better than anyone ever and how to live lavishly without an income”.  He was a fixture on the veranda at every tour stop, tour watering hole, and putting green.  His prowess with the flatstick and a quick joke made him welcome fixture on the tour for thirty years.

In the chapter called “Wide Open” he describes a tournament with venues of aristocratic reverence, offering a title which guarantees wealth and fame for life, but that could be won by just about anybody or a nobody.  For example, Lee Trevino, “a laughing tub of echiladas in bright red socks with a caddy-hustler’s game” or Orville Moody, “who had a name like … a drag strip mechanic and who didn’t even have a hometown to be poor from.  Just fourteen years of Fort Hoods and Koreas”.

My personal favorite is his piece on Dave Marr “The Pro of 52nd Street”.  Dave Marr was Texas born and bread-pure Banlon in Argyle socks.  In an otherwise undistinguished journeyman’s career he won a major, the PGA at Laurel Valley, and parlayed it into a life- long corporate outing full of networking with the stars and the champions of industry.  You see this charming, likeable, self-deprecating guy realized what Frank Sinatra knew, if you can play NYC you can play anywhere.  So he moved to New York, traded the argyle socks for double breasted blazers and Gucci belts, and adopted the New York lifestyle as his own.   Doing his thing in the bistros and bars he developed life long friendships with celebrities that made him someone to hang with.   In spite of regularly finishing twenty-third or worse, the income flowed from endless corporate outings and a broadcast gig based on his popularity among his peers and an insider knowledge of the game.

The book ends with “The Doggedest Victim” about his good buddy Arnold Palmer.  Jenkin’s personal account of Palmer’s historic and folkloric come from behind victory at Cherrry Hills in the 1960 U.S. Open characterizes the entire book.  In Palmer’s ascent to “the most immeasurable of all golf champions” Jenkin’s characterizes him as the “doggedest victim of us all”.

Dan Jenkins will be inducted into the Golf Hall of Fame in May of 2012, only the fifth golf writer to be so honored and the first to be inducted while he was living.

As one of the most prolific golf writers in history, his body of work clearly qualifies him for this long overdue honorarium.

Do yourself a favor, the next time you are on the Barnes and Noble web site and need another $10 item to get you over the $25 minimum for Free Shipping buy yourself a copy of “The Dogged Victims of Inexorable Fate”.  It will be a welcome addition on your nightstand or next to your thrown and provide you plenty of laughs and expand your knowledge of the history of the game.

The Dogged Victims of Inexorable Fate

2 thoughts on “The Dogged Victims of Inexorable Fate”