In his book,  “The Man Who Mistook His Wife For A Hat” , the neurologist Oliver Sacks talks about the ability of people who have lost a limb to compensate for it by subconsciously imagining the phantom limb is still there.  Witness a real life rendition of this theory by taking a few minutes to watch this inspirational video called “Manuel De Los Santos” produced and directed by Peter Montgomery. 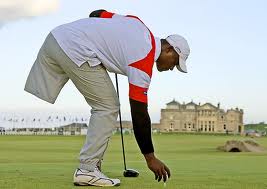 Teeing it up on the 18th at St. Andrews (sportsdoinggood.com)

Manuel De Los Santos grew up in the Dominican Republic and, like so many young athletes his age, hoped to pursue his dream to be a professional baseball player.  Talented and driven he was on his way to doing that with the Toronto Blue Jays in 2003 but his plans were sidetracked by a terrible motorcycle accident where he lost his left leg above his knee.

Following the accident he moved to France where he and his wife happened to see the film “The Legend of Bagger Vance” and it’s moving content inspired Manuel to take up golf.  As you will see in this film, he is an extraordinary athlete and through endless hours of hard work has dedicated himself to being a top caliber golfer.  He routinely hits his driver 300 yards, has a short game to die for, and now plays to a three-handicap and competes in tournaments around the world.

Besides the inspirational aspect to his accomplishments, this man has one hell of a golf swing.  If you look at the video, from the waist up his mechanics are pretty amazing.  He rotates his torso around the inside of his right leg, just like they say in all the instructional videos, and at the top of his swing he fires his left hip first to drop the club perfectly into the power plane on the way down.  From behind you can see he has the perfect balance of a skilled player and uncoils to a full finish with his chest facing the target on the follow through.  As he says in the video, when he gets to the golf course he finds his second leg, it is like it was never gone.  This is the phantom limb theory in action, his left side does not know what is missing and his swing mechanics are just wonderful.

Maybe the best part of the video is his quote that golf brought a smile back to his life.  It has done so for so many of us who use golf as a way to manage the stresses in our daily lives.  Manuel’s attitude and accomplishments are something to behold.  It reminds us that the highest hurdles we perceive in our lives are often self-created and it is up to us to figure out a way to deal with them and put them in our rear view mirror.

3 thoughts on “The Phantom Limb”