The Four Seasons needed to create a name brand golf course as the centerpiece for their residential resort community on the big island in Hawaii. Jack Nicklaus was retained and did a first class job delivering them a visual and memorable resort course for their guests and home owners to enjoy.  This is a user friendly track with wide driving areas, accessible greens, and not a whole lot of deception.  They host the opening event on the Apostle Tour each year, so you are likely to remember seeing old guys in January begging against the wind on the last two holes.

The signature feature of this course is that it was built on the black lava fields of the eastern Kohala Coast and Jack’s goal was to meld the holes into the up and down flow of the lava fields.  The lava creates a harsher version of the gorse or the heather on the Scottish courses setting a stark visual outline on every hole for the lush green of the Tiff Bermuda fairways and greens.  If you look up the eastern horizon to the mountains from which this came, you do get a real sense of the topographical flow of the element and how it defines the character of this course.

Click on any photo for an enhanced view of the image 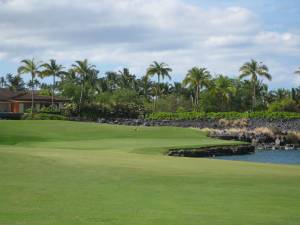 For the most part, the lava is set off the immediate playing areas and there are only a select number of times where it becomes an integral part of the golfing challenge.  The more significant tactical challenge is Jack’s generous use of fields of fairway bunkering.  From the first hole to the last you will see repeated occasions where an entire side of the hole is bunkered, creating a dogleg effect on it’s own.  Missing into the sand on that side of a hole can be a scoring disaster.

The course begins with a typical low impact Florida style par 4-wide fairway-open access to a big green-no lava.  But you cross the road and enter a lava quarry which prepares you for the full lava look. Number two is a visual bait and switch landing area and then a large lava dune on the right obscures access to a very tight green.  The rest of the way is pure lava eye candy.  The short par four sixth is a great example of lava outline  that can appear intimidating with a green complex set in a lava canyon but there is a collar bunker off the back of the green that keeps balls from getting lava burn.  Seven is a unique par five where after you drive to a wide open landing area and play your second down a lava hallway that chokes the fairway framing the required lay up shot. 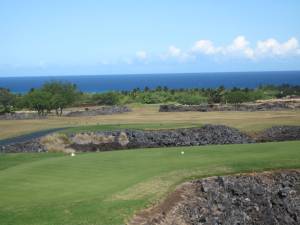 There is an over-hyped cookie jar with some oatmeal raisin and chocolate chips at the turn but the fresh fruit in the cooler is a refreshing touch before you begin the inward half.  The five pars on the back are the most interesting holes of the day.  Ten is a serpentine par five that requires full focus on your lay up shot to have a look at a green hidden behind an acre of sand, trees, and lava.  From twelve to fourteen you are as close to the ocean as you are going to get so the wind becomes a major factor in all club selection.  Fourteen is another very imaginative par five with a hide and seek green complex that is difficult to negotiate with a wedge in your hand.

The finish is all finesse as you head back toward the clubhouse.  A couple of technical par fours before you reach the signature seventeenth, the only hole that is truly exposed to the Pacific.  Here you have to parasail one through the sea breeze onto a well protected green-anything left hits lava and heads toward Japan.  The finish is a beautiful short par four over ancient Hawaiian fish ponds and a Nicklausian sea of sand into a demanding tight green set. 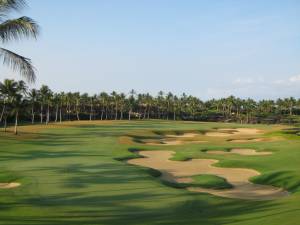 This is a Four Seasons so all the amenities are first class.  A sprawling practice facility is at your disposal with a couple of acres of grass teeing area, pitching green, and a large ambling putting green.  Perfect recluse for a five o’clock practice session to sort out the demons you encountered today.  There is nothing like the tranquility of downhill ten footers dropping into the cup as the sun dips back into the Pacific Ocean.