Robert Trent Jones was “the man” among golf course architects in the 1960’s when he was asked by his wealthy friend Laurance Rockelfeller to design a course to compliment a $15 million dollar remote destination resort being contemplated for the arid west coast of the Big Island. Trent was confronted with a challenging piece of hilly, lava entombed real estate next to a large piece of paradise. It took all his creative skills and engineering prowess but he did a marvelous job orchestrating the ground into a stage for an unforgettable golf experience.

Much like his creations from this same period at Spyglass Hill or The Golden Horseshoe, he found a way to use the tumultuous terrain to his advantage to provide startling vistas and tactical golf challenges. Robert Trent Sr. was one of the patriarchs of the heroic school of design so this one is not for the feint of heart. It was updated by his son Rees in 2008, who is another one who does not cut any slack for the meek, so if anything the resulting course became harder.

His son’s renovation work looks to have touched every corner of the property.  The main improvement was the move to the latest version of Tiff Bermuda grass throughout which makes it more durable and environmentally friendly to maintain. They say the irrigation systems and the drainage were improved to solve long standing issues.  What you see are typical Trent Jones greens-sprawling and segmented to make them tactically relevant-that roll a top speeds because of the new grass.  The bunkering has Rees’s fingerprints all over it-plentiful, artistic, always front of mind.  His presentation of these green complexes will take your breath away and often leave you scratching your head walking to the next tee.  The bermuda grass presents a particular challenge when pitching and chipping around these greens.  Steep swings get caught in this sticky grass which takes the high lob shot out of your repertoire for the day.

What you see is a place with a real 60’s retro feel about it-the architecture of the buildings and the residences throughout the property are that low square “I Spy” California look. They have recently redone the golf shop and Number 3 restaurant to bring them up to the quality of the rest of the facility.  The only disappointment is the practice area which remains in dire need of upgrade, expansion, and softer golf balls.  They could also do a much better job in relating to you the green topography and pin positions of the day, especially since both should figure into your playing strategy on every hole.

Robert Trent’s challenge at Mauna Kea was two-fold, he had to make arid land seeming inhospitable to grass growth suitable for golf and reign in the rugged topography to route holes that were challenging, playable, and would showcase the dramatic vistas of the Hawaii’s Kohala Coast.

Lava fields dominate the coastal areas on this side of the Big Island creating a rocky wasteland over the 230 acres intended for the site of the golf course. This side of the island gets very little rainfall so finding the water to support any vegetation would be a challenge as well. Trent realized that there were two kinds of lava present-brown lava that can be crushed to a powder mass and blue rock lava that is virtually impossible to break up. Managing a metamorphosis of this ground to make it suitable for golf seemed like an insurmountable challenge.

Never one to back down from a challenge Trent and his experienced engineering crew developed their own engineering techniques and processes that enabled the use of the crushed lava as a soil base on which he added a mix of lime and crushed coral dredged from the nearby bay to grow a hybrid brand of Bermuda grass with great success. The water he needed was provided by drilling a couple of wells almost 400-feet deep coupled with the first fully automatic underground golf course irrigation system of their own creation. The result was astonishing, green grass flourished in what had appeared to be an arid desert. The blue lava was either blasted, buried, or left alone as an accent to the developing holes. The cost of all this was over $2 million dollars, equivalent of close to $15 million in today’s currency, an unheard of expenditure for building a golf course in those days. But Rockefeller had the deep pockets and the desire to have a special centerpiece to his high end resort.

Robert Trent’s challenge was to reign in the rugged topography and route holes that were challenging, playable, and would showcase the dramatic vistas of the Hawaii’s Kohala Coast.  Routing the holes straight up and down the slopes he gives you some very severe elevation changes that will increment club selection but very few holes with side ways roll offs.  This makes picking and maintaining shot lines much more manageable.  As is often the case with this type of terrain, there is rarely a long run for a straight fairway so most of the holes bend dramatically or are folded to fit the available shape of the land.  The result is that there are many short par fours that play from a high tee to a landing area below and then turn dramatically to a four-story green complex on top of the next hill.  This template will wear on you, especially if hitting high elevation, full carry approach shots is not in your wheelhouse.

For me the par threes are the centerpiece of this course.  Number 3 is the signature hole with the Cypress Point look and not as much ocean to carry.  This is a photo opp for sure so you can expect a backup due to clicking digital cameras.  Number 11 is another absolute beauty-a medium length par three.  It is a downhill look at an evasive green nestled against the ocean-it brings to mind the 7th at Pebble with a much longer club in your hand.

The par fives are some of the most imaginative you will play anywhere.  Here Trent uses the incline, some carefully placed fairway bunkers, and dramatic green arrangements to give you chances for success or disaster on every one of them.  Eight and seventeen are tumbling dice affairs where you cannot believe how far your ball has traveled and are tempted to do things you probably should not consider.  Of the par fours I like nine and eighteen in particular because both give you the distracting dramatic look of the coast line below but demand you control the line and carry of your shots to have a scoring chance at the end of each side. 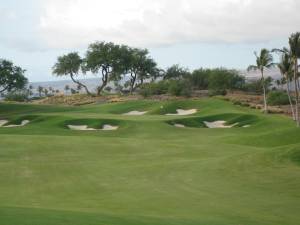 Sequencing of the holes is what creates a tactical momentum for any course.  He did a marvelous job in this regard starting you out with relatively easy holes each nine and then quickly picking up the challenge in the next few holes.  Once you reach that level the challenges come in a variety of forms in rapid succession, you barely get over the rush from the last whole when the wow factor of the next tee hits you.  This is a course where you will have a bad hole but there are plenty of chances to redeem yourself with smart decision making and timely shot execution. 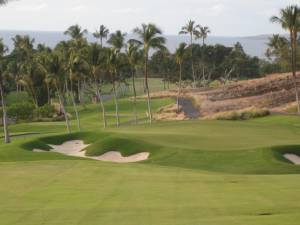 As I said earlier, this is not a course for those who are not up for a stiff challenge.  If you cannot hit the high carry shot or big bad bunkering intimidates the hell out of you then take the day off and go to the beach instead.  But if you are up for it this is Robert Trent Jones at his macho best.  Play well here and you will have some serious big fish stories to lay on your friends.