A strong handful of renowned public golf courses exist in the United States that represent the most virtuous commitment of their municipalities to providing access to high quality design to everyone.  The George Wright Golf Course in Boston, an original Donald Ross design through and through, is one of these.

The Wright was built in the Depression period of the 1930’s on the old Grew Estate that had been conveyed to the Department of Conservation of Massachusetts through the efforts of George Wright founder of the Wright and Ditson Sporting Goods stores in Boston.  This major project of close to $1 million was financed through the Roosevelt Administration’s Works Project Administration.

In what proved to be an enormous undertaking because of the rugged topography, the construction employed almost 1,000 people as it was completed over a three-year period opening for play in 1936.  There is a unique local flavor to the artistry of this facility in that it included a three-mile long perimeter flagstone wall built by the Italian and Irish masons of Boston and a stunning French Chateau style clubhouse that belies a typical municipal golf course setting. 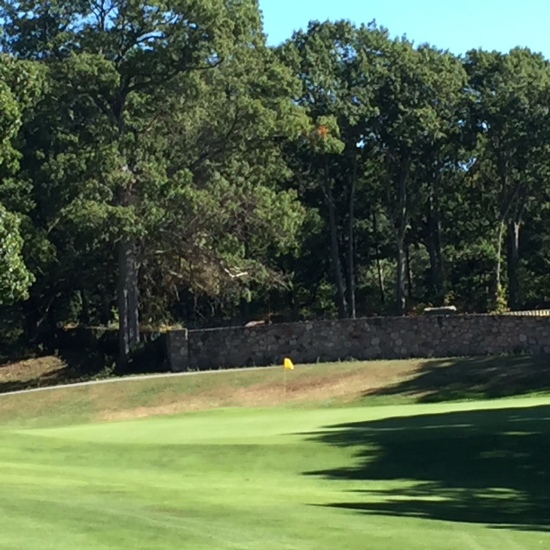 From the time it opened this course was well reputed and hosted many big local and regional tournaments.  Among the best players it was considered an equal to the posh private venues of Boston.  But time took it’s toll and after the war and a series of financial problems that ensued, it fell into disrepair and by the mid-1980’s faced imminent closure.  Against all odds, an assiduous lobbying effort by the Massachusetts Golf Association kept it in operation for the next 20 years.  Finally in the early 2000’s the powers that be in the city of Boston made the bold commitment to restore George Wright to the original quality and design.

The key to this effort was the arrival of head pro Scott Allen in 2001, who spearheaded the restoration effort, and the hiring in 2004 of Len Curtain, a greens superintendent with a special affection for the place,  who grew playing the Wright.  With the consultation of a Massachusetts course designer Mark Mungeum, together this group embarked on the long term project to peel back decades of neglect and bring this wonderful venue back to original glory.

Lots of trees were removed and the green complexes were restored to their original Ross shapes and surrounds.  Fairway bunkers were relocated along with a few new additions to help the course meet the challenge of the contemporary equipment.  Together they brought back the Wright to a course worthy of being designated as the site of the 2018 State Amateur-the first time in the tournament’s history it will be played on a municipal golf course.

The first, ninth, and eighteenth holes are on the flattest portion of the property just below the clubhouse veranda so the course begins and ends on a fairly tame note.  On the second tee, in spite of the abundant width of the driving area, you get the sense this is a tee ball position course as the green in the distance is suspended on an alcove shelf tucked in the corner of the property.  From three thru fifteen the course is enveloped in a solitary cocoon and you won’t see any man-made structures besides the clubhouse and the maintenance facility. It makes you wonder how it could be just four miles from the center of a major American metropolis.

The Par 5 3rd gives no room for wandering

Standing on the third tee the challenge is at hand as you are staring up the narrow hallway that defines this uphill and stringent five par.  Keeping the ball between the hash marks off the tee, controlling the roll out, and finding the proper angle of approach for the day’s pins into these Ross green complexes will determine how your scorecard will fare today.  It goes without saying that it will be peppered with some high numbers but you have to accept them and remain aggressive to balance the outcome.

One thing you cannot fail to notice is that the holes are often lined with rock outcroppings or tall mounds.  These mounds were created by covering the piles of rocks rendered from the fairway demolition and you can begin to appreciate how much went into discovering playable fairways on this severe and rugged terrain. 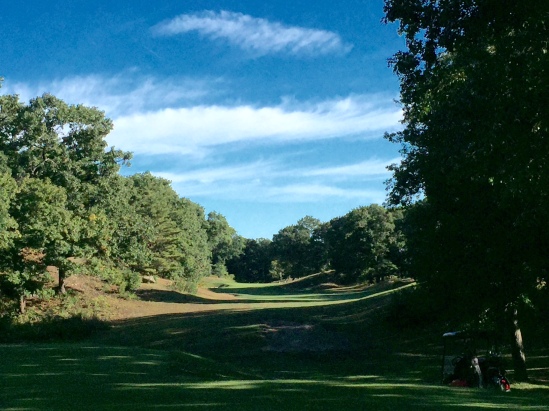 The devil is in the detail as you can see in the Hole-By-Hole Analysis below, the contours of five through twelve in particular will challenge your tactical instinct trying to find the line of charm.

Note: If there is someone manning the dog-at-the-turn cart between the 10th and 12th tees I recommend well done with relish and mustard.  The homemade cookies are not a bad chaser either.

The 8th one of the four intimidating three pars-very demanding little room for error.

As an aside, the par threes may be the most interesting holes on the course.  Every one of the four stands apart in visual distinction and precise shot making is demanded.  Not one of them is over 190 yards yet playing the four of them anywhere near par is a major accomplishment.  The Ross bunkering and segmenting of these four green complexes will sustain vivid images in your mind when you rehash the day’s journey later staring at your dark bedroom ceiling. 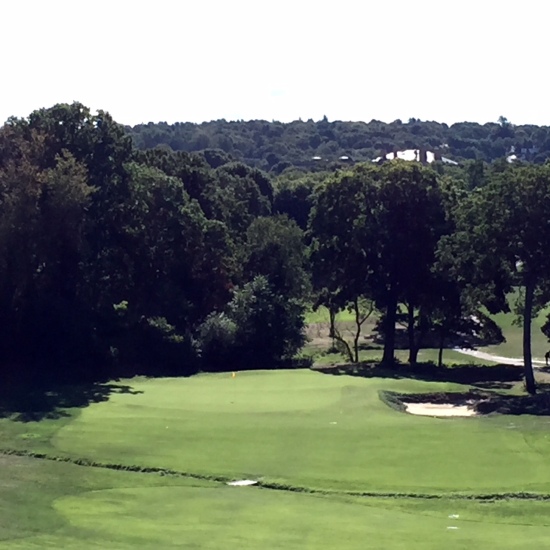 The inward nine takes up right where the last one ended with roller coaster elevation changes on the first three holes.  Be cognizant on all three of these not to drive the tee ball too far and overreach the best landing spot for the approach.  As you can read in the detail the blinded approach shot into the tenth green takes serious visualization.  The approach into the eleventh will take a different kind of creativity as it will take all your ground skills to give yourself a good scoring opportunity there. 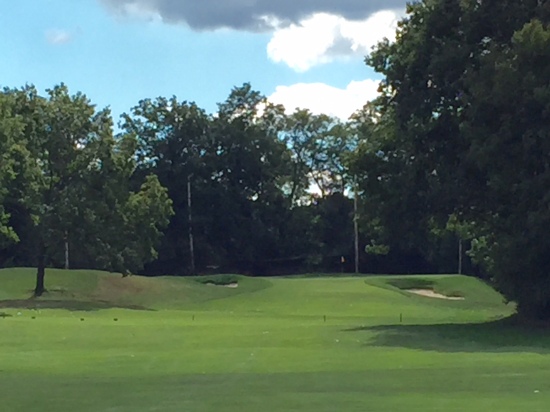 If you reach the thirteenth tee with minimum scorecard damage there is great opportunity to make up ground on the way to the house.  This hole is one of the most visually pleasing all day but you have to hit two very articulate shots to avoid the hazards that haunt the hole from tee to green.  What follows is a challenging uphill par three followed by a stunning three-shot par five that should give you a good chance to apply some salve to the scorecard.

Talking a 2+ club elevation change into the mountainous 16th green

I would be remiss if I did not give a shout out to the Mt. Rushmore green complex of the sixteenth hole.  No course architect would even consider building a hole like this today, but it is just flat out fun.  From the base of the hill where your drive will end up it looks like you need to hit one over George Washington’s left eye and land it on the crown of Thomas Jefferson’s head.  That is kind of what you have to do…long or Roosevelt right is no good at all. 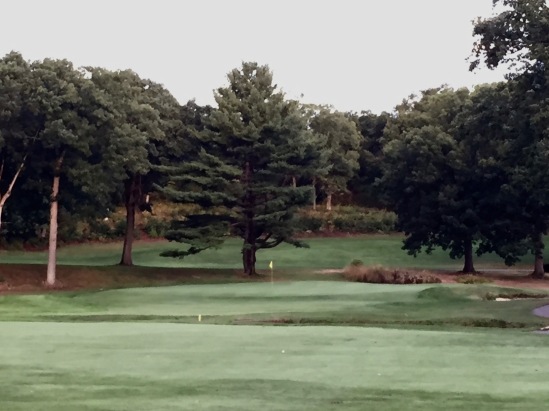 The two holes that bring you back to the house are very interesting.  The short par three seventeenth is one of the truly quaint looks of the day.  Encircled by sand it takes a lawn dart to give yourself a good birdie chance.  The home hole is a level walk on ground similar to the first, but the green is very deep with severe contour so you must focus to get your approach all the way to the day’s pin. 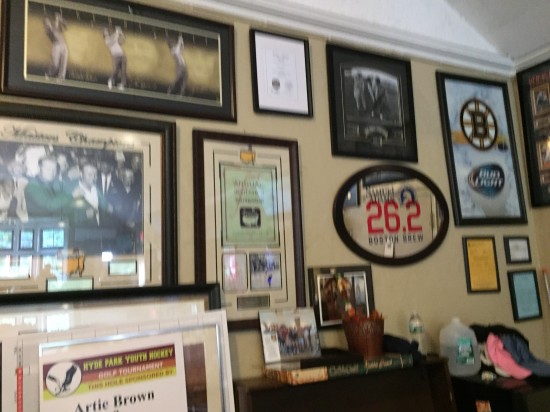 When it was said and done, I found the George Wright an amazing municipal golf experience, right down to the clubhouse building and the players Bar and Grill.  Linger for a cold Samuel Adams and some nachos, check out all the Boston sports memorabilia on the wall, and savor what has been a wonderful day of old style golf at a very accommodating price.