A golf course with a long and rich tradition that belies it’s mere 50 years of existence.  Most of us remember this as the place Dave Marr won the PGA and associate it with Arnold Palmer as his adopted summer home course when back in Pennsylvania.  The members will tell you that it is Palmer’s aura that is most responsible for the reputation of this place-after it was built in 1959 under the watchful eye of Dick Wilson it was Arnold who went to the PGA and told them this would be an appropriate place to host their championship.  It has built on that reputation hosting the National Four Ball championship in the 1970, the National Team Championship in 1971 and 1972, the Ryder Cup in 1975,  significant events from the Pennsylvania-Ohio-West Virginia region, the U.S. Senior Open in 1989, and the Senior PGA in 2005.

When you walk the hallways of this demure clubhouse, the pictures and memorabilia make you fully aware how seriously the members take the rich history and tradition of this place.  There are paintings and photos everywhere full of bouquets of pink sport jackets-an unusual touch for a macho corporate hangout.  Don’t miss the photo library on the walls around the informal bar-there is a classic shot of an intense Arnie and Jack as playing partners in the National Four Ball back around 1970. The locker room is very classy-old wood lockers bearing name plates of PGA and Champion’s Tour players.  This place just has a very traditional good old boy feel to it.

(Click here to see a few of the gems from the Laurel Valley photo gallery).

View across the first tee (pga.com)

The club was originally built as a business man’s club for corporate parties and events during a face-lifting renaissance in Pittsburgh in the late 1950’s.  The club is only open from May through October-it completely shuts the doors for the late fall and winter-a business model that seems hard to sustain without considerable annual member backing.  It is a golf facility only-food service to support the golf and events and some cottages to house out of town guests.  The lay of the buildings to the rest of the property was very well thought out-there are sitting areas providing views of the property and surroundings that are truly spectacular.

The course is built on a 260 acre tract of land in the foothills of the Laurel Ridge and Chestnut Ridge mountains. It does not have much topographical feature in it’s tactical play, though the visual back drops can be dramatic.  The design has a Florida feel to it with abundant sand and water, Dick Wilson wended the course through the low grounds deploying massive fairway bunkering and adjacent water hazards to keep the player’s attention.  Fifty years of tree growth have cloistered the holes considerably, but recent renovation has brought back the more open playability as it was originally intended.

One thing that can certainly be said about this is that the course can play very long from the two back tee markers.  At the 6600 yardage of the white tees it is an ample test for most mortals-the additional yardage can make for some excruciatingly long par fours.  Like most courses of this style driving accuracy is key to decent scoring opportunities.  Playing from the fairway bunkers or tough angles in the rough is a sure prescription for bogies and worse.  For the most part the water is manageable but there will be times during the day when your judgment for carry will be called into play and more often than not bravery is not the sensible route. 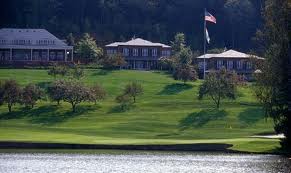 There are many interesting individual holes on the course-the par threes in particular have lots of nuance and subtlety to them.  Not too many “wow” holes but some of the scenic backdrops will catch your attention.  What really elevates this to championship caliber are the greens-they are very swift with ample undulation that seems to shrink the accessible opening on most of the cups.  Very few putts go directly up the walkway and into the front door-you will be using diversionary tactics all day to find the bottom of these cups.  The caddies are excellent here and you need one if only to tell you where you can leave the approaches into these greens.  The pitching and chipping are particularly difficult because some of the swiftest approaches are not obvious to an inexperienced eye.