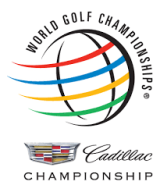 It did not start out well for Adam Scott in the final round of the World Golf Championship at Doral making two double bogies in the first five holes. But as he did the previous week at Honda he showed veteran resilience and used laser sharp iron play and very steady putting to card seven birdies, four on the inward nine, on the way to his second clutch win in the last two weeks.

We saw alot of this gesture since he got to Florida

This win did not happen without a bit of good fortune but sometimes the golf gods are just looking down kindly on you on a Sunday. With his excellent play on the back side Adam had grinded his way to a one-shot lead over Bubba as he stood on the 18th tee looking at the formidable task of finding the fairway to protect his lead. The drive leaked into the right rough and his direct approach to a phone booth back left pin was blocked by a lone palm around six yards in front of him.

The competitive instincts of a veteran forbade Adam from laying up so he laced a long iron with a bit of fade out over the water trying to find the putting surface and set up a two-putt par. The little bit of rough made it hard to get the requisite fade spin on the shot that was struck purely and you could see the angst on his face as a watery grave looked imminent.

Divine intervention was required as the ball carried the hazard but hit the steep bank making it likely it would tumble back in for a rinse. Somehow the ball hung in the thick Bermuda grass within the hazard line leaving Adam a life line to make his par. To his credit Adam took advantage of the break and hit an elegant elevator shot off a severe stair climber stance to six feet and calmly rolled in the par putt for the win.

.
Probably the equally intriguing story is Adam, a poster child for the anchored putter, overcoming years of balky putting with the broomstick to putt so proficiently with a conventional length unit. All the pundits said that guys who had learned to lean on the anchored style would struggle in making the transition.

Adam said in an interview last week that the USGA and R & A edict on banning anchoring may have been a blessing in disguise because it made him focus on his putting deficiencies and face his demons. If you saw the broadcast at Honda NBC did a slow-mo side-by-side of Adams stroke with the long putter and the conventional putter and it was truly amazing how identical his vital shoulder-to-grip-triangle was with the two putters throughout his stroke. It seems like a geometric impossibility to do so but Adam has reconciled how to translate a confident stroke with the long putter to his conventional implement., He made 18 of 18 putts inside 10 feet in the Sunday final round so it is working handily at the moment.

.
Peace of mind on the short grass has made all the difference

.
Bottom line is that including a second at Riviera Adam has garnered over $3.3 million in the last three weeks jumping him to the top of the Fed Ex Leaderboard and inside the top 10 in the World Golf Rankings. He has found form in the fairways and on the greens just in time for the first string of Majors in 2016.

With Dave Clark on the bag Adam has gotten good direction

In spite of this success with his new caddie Dave Clark he will not be on the bag come The Masters. Adam is no dummy, he had previously arranged with Stevie Williams to interrupt his racing Mustangs on the stock car circuit in New Zealand for a week of bag work in April. Stevie is the ultimate “Majors” counselor, having been on the bag for 13 of 14 of Tiger’s Major wins. He also knows as much about Augusta greens as Clifford Roberts and carried for Adam when he won at Augusta in 2013. Makes sense to put the band back together.