For 28 out of the last 29 years our place, Woodmont Country Club in Rockville, Maryland, has hosted the 36-hole final stage men’s U.S. Open Sectional Qualifying. The USGA has even thrown in a few Women’s Sectional Qualifiers along the way for good measure. 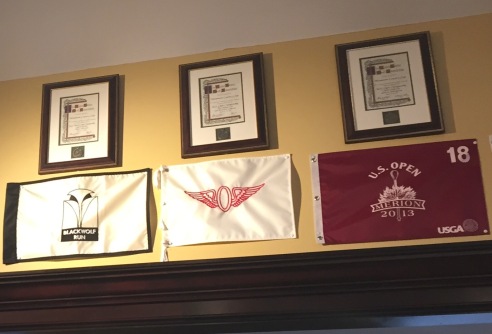 Our members have been blessed with the opportunity to see some of the best players in the land play up close and personal on the home turf. Over the years tour champions like O’Meara, Stadler, Freddie Boom-Boom, Larry Mize, Bubba (apparently there is a spooky connection between Woodmont qualifiers and success at Augusta), Corey Pavin, Tom Kite, Fred Funk, Curtis Strange, Billy Andrade, as well as many of the top amateurs of this era have found their way to the U.S. Open Championship through our neck of the woods. Walking with them…no gallery ropes…watching them play shots on a championship course we are totally familiar with has afforded us a unique opportunity to appreciate the awesome talent level of these guys.

This year’s field of 56 pros and amateurs were vying for 3 spots at Chambers Bay in two weeks. I had the opportunity to walk and score the final 18 holes for the USGA. Wireless Galaxy tablet in hand we provided the USGA with semi-live hole-by-hole scoring of the final round to populate their web portal with developing scores throughout the afternoon. Pretty awesome experience when you realize that the competitors themselves, as well as interested parties across the country, are hanging on the accuracy of your scoring to keep up with the action. 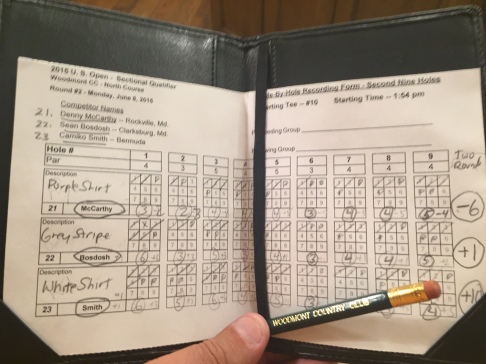 My group included Denny McCarthy, who along with PGA Tour pro and ex-Navy officer Billy Hurley III, took medalist honors at 6-under par after two trips around our North Course in blustery and hot D.C. summer conditions. The final spot went to Timothy O’Neal who won a three-hole playoff over Joshua Persons-both had finished at 2-under.

McCarthy is a true hot-shot amateur. Born and raised in this area he built an impressive golf resume as an All-Met schoolboy star playing for Georgetown Prep. He has been a stand out on the University of Virginia golf team the last four years, reaching the semi-finals in last year’s U.S. Amateur at the Atlanta Athletic Club. His familiarity with Woodmont’s North Course from his high school days certainly helped him in today’s winning performance.

After a 2-under par round in the morning McCarthy was two-back of the qualifying number when he teed off on the 590-yard Par 5 tenth hole to start the afternoon round. He promptly put a swerving hook left-of-left near the 18th tee but showed his survival instincts sewing a low recovery through the trees to about 100 yards out. Wedging to 20 feet he promptly sunk the putt to make an unlikely birdie. The next eight holes was a collection of wayward tee shots and brilliant recoveries as he made eight pars to reach the turn at 3-under in fourth place-one back from a qualifying playoff.

Informed by his caddie at the turn of where he stood you could see Denny’s bulldog resolve take over as he birdied 4 of the first 5 holes on our front nine to take the bull by the horns. The most impressive of the lot was a rope 240 yard long iron into a Clark Kent phone booth pin position on our arduous par three second. The five footer hit the bottom of the tin and he was in full birdie gallop at that point. His final birdie on the Par 5 fifth was three wood, long iron to 30 feet, perfect lag leaving a tap in birdie to take the lead at 7-under.

Playing the next three on steady cruise control Denny took no gambles giving himself birdie putts on every green but accepting pars as his friend trying to get to the house with the lead.

Our ninth is a 485-yard behemoth Par 4 from the tips with OB right and lots of tree trouble left, scorecard wrecking double-bogies lurking for those without judgment. Three wood to 220, long iron safely to the front left apron, a pitch and a couple of putts Denny smartly accepted a dropped shot to finish at 6-under tied with Billy Hurley for the top spot of the day. 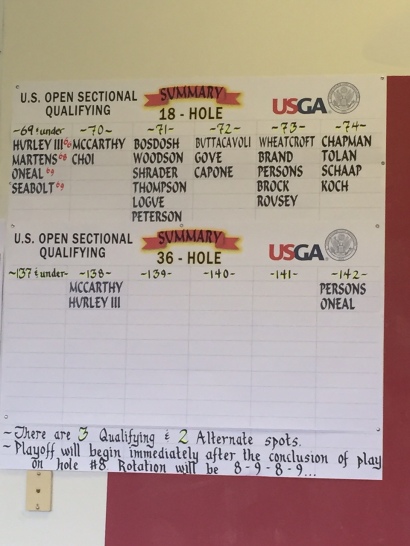 After the cards were signed and the scores were posted I ran into McCarthy’s father milling with his supporters near the scorer’s tent. He was talking on his cell phone when my comment to him “Making hotel reservations in Tacoma for next weekend?” generated a knowing wry smile.

Who knows if this is the beginning of big things for McCarthy over the next year. But given what his contemporary Jordan Spieth has done recently you never know. All I know is that I witnessed a gifted young player producing 18 holes of his best golf in a pressure-packed situation. It was the stuff of a champion and a great thing to see first hand.