Here is a shock for you, men in Great Britain and Ireland in the 19th century loved to bet on anything- horses, archery, parlor games, and, of course, golf.  To make the golf competitions workable they had to come up with a method for leveling the field between players of different ability so creating a course handicap became important to facilitating the wagers.

There first effort  in the mid-1800’s was to take the average of a man’s lowest three scores of the year at their home course and subtract it from the scratch score for the course to create a handicap.  This was fine at the home course but it did not travel well to away games where the courses were not of similar caliber.

The next iteration came from an unlikely source the Ladies Golf Union.  In the 1890s these adventurous women assigned a course rating to member courses to create a calibrated standard for the comparison to the average scores.  This actually worked quite well in establishing a handicap system that was reliable from club to club. 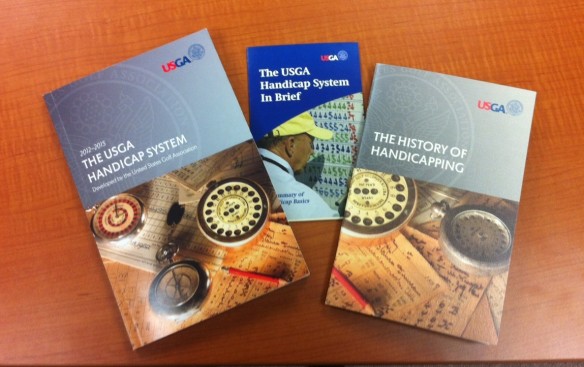 When the game sauntered across the Atlantic it did not take much time for the blue blazers at the newly formed USGA to put their arms around this establishing a similar approach.  At first the USGA let each course establish it own course rating but it became evident in a hurry that this led to farcical results.  So they too created an objective method of issuing official course ratings.  Now they had a way to create objective handicaps that would be mobile enough to support inter-club competitions.   By using the three best scores of the year the first principle of handicapping was also clear-it would measure potential not playing ability.

As it further evolved it became evident that using only three scores a year favored the better player who could more reliably play to such a narrow sample of potential.  So they began computing it from larger subsets of the scoring records of players and eventually landed on the sample of 10 best of the last 20 scores.   They threw in the caveat of a “Bonus for Excellence” by using a multiplier of 96% to determine a player’s final handicap index.  This was to reward the better golfers a slight edge in head to head competitions with high handicappers.

The last piece of the puzzle was the implementation of Equitable Stroke Control (ESC) in 1974 which created a variegated method for maximum score on a hole based on the player’s Course Handicap.  This helped to smooth the curve on scores being posted by individual players.

It is worth noting that the word “Par” never appears in the discussions of handicaps or their calculations.  Rather the USGA created two ratings to support the handicap system.

The first is the Course Rating which is a baseline objective calculation of a course’s difficulty to a scratch player-it does not address how the course would be played by an average player. A course rater goes through the course simulating the positions off the tee of a scratch golfer (average 250 yards out) and takes into consideration factors of difficulty they face from hazards and objects they must traverse to play each hole.  By compiling these scoring factors they come up with a course rating for the relative difficulty of the course to a scratch player.  This Course Rating is established for every tee length.

In the mid-1970’s the USGA introduced a second rating through the new Slope System aimed at determining the relative difficulty of playing a course to the bogey golfer rather than the scratch golfer.   Once again they use the driving distance of a player with about a 20 handicap and determined the scoring effect of hazards and objects they face in playing out the hole.  This is called the Bogey Rating for the course.  The Slope Rating measures how steep the rise is between the Course Rating and the Bogey Rating on the course-the steeper the rise the higher the Slope Rating.  The Slope Rating is intended to show the relative difficulty of the course for a non-scratch player from each tee.

Here is the basic math.

-Multiply the player’s Handicap Index by the Slope Rating for the tees being played and divide this by 113 to get their Course Handicap for this tee.

Note: This is a measure of potential and should only be achieved about 20-25% of the time.

-If competitors are playing from different tees the USGA stipulates an adjustment must be made to the Course Handicap of the players for the advantage of playing the forward tees.

Player A playing from a Blue Tee with a Course Rating of 70 whose Course Handicap is 10 from those tees will have a potential Target Score of 80 for the day.

Player B from the Gold Tee with a Course Rating of 66 whose Course Handicap is 9 has a potential Target Score of 75.

Player B playing from the shorter tee length it calculates to a 5 shot advantage in the potential score for the day.

In developing this Handicap System the presumption on the part of the USGA is that all players try as hard as they can on every hole in a posted round and that they will post all the rounds that can be posted.

The reality is that personal integrity is the only guarantee of accurate score postings.  In spite of the valiant efforts of Handicap Committees at clubs nationwide, the inaccuracy of Sand Bagger and Vanity handicaps will haunt competitions from now until doomsday.

If you yearn to delve into the nuances of the USGA Handicap system in more detail visit the website of former USGA Senior Director of Handicaps, Dean Knuth  (Pope of the Slope).  Dean is the walking and talking authority on all things handicap and his site is quite readable.