Indian Summer, or fall as we call it in the east, offers a unique opportunity for our season ending annual Cross Country event.  Through the quasi-capable efforts of Ben and Bill of Dwinkoff Associates nine new and original holes were plied from the landscape of one of our two courses.  Using alternative tees and approach lines to existing greens they presented a test  that required creative tactics, patience, and a smidge of luck.

In a Step-Back Four-Man Scramble format 32 of our members participated in this gross competition.  Three par 3s, two almost par 5s, and four par 4s made up a 35 par 2844 yard field of play.  On every tee they got a photo of the hole, the hole name, and yardage….with the modern yardage technology in hand there were few mysteries, other than having never played these holes before.

There were tempting short par fours like “Range Rover” which was a 250 yard uphill carry across the environmental abyss and few other architectural features (click on the photo to see full detail)…..at a stroke average of 3.25 to the par 4 this proved to be a pivotal hole in the competition.

“No Peeking” was a unique Par 3 of 170 yards  which required an obscured shot over a stone shelter to a two-level green with the pin tucked into a phone booth.  Like the “Redan” from North Berwick this will be copied by next generation creative designers who can think out of the box.

The “ICC” (inter-county connector) required a blind tee ball across pond, trees, and rough to the landing area….

…….what was left was another 220 yards plus uphill into a stepped green with a hidden flag.

The scores were better than expected with all 8 groups shooting gross par or better.  More often than not it came to driving it in play and making putts. 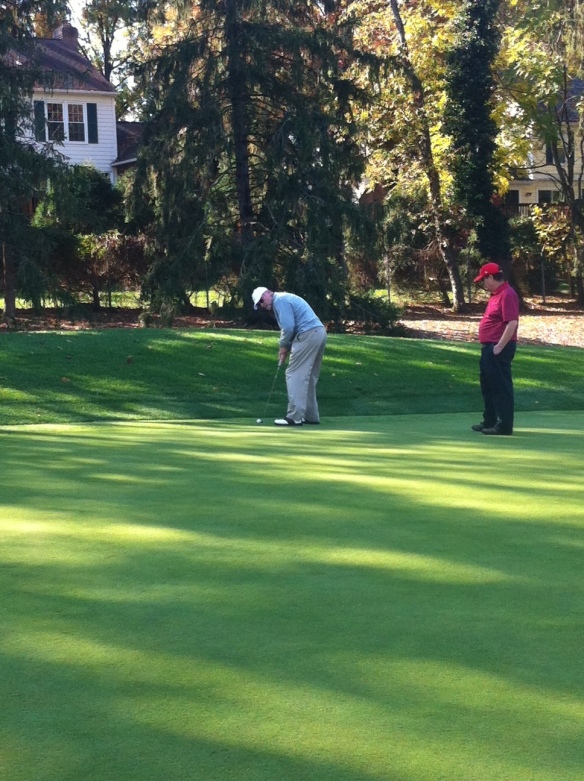 After a couple of four under 31s had the mingling troops conjuring up a playoff hole
(everyone is an arm chair designer) the team of O’Neill, Zweig, Gordon, and Greenbaum posted a five under 30 to put all the conversation to rest.

They had five birdies and an eagle on the “Range Rover” against one bogie on the 234 yard Par 3 Bird House on their way to the winning tally.

From the left are those to whom the spoils were conveyed….. Mr. Clean, The Deer Whisperer, Zowl, and Book Em Dano……they sure look happy pointing out the obvious.