Founded in 1892 and heralded as Cape Cod’s oldest golf course, the Highland Links in North Truro is one of America’s nostalgic golf treasures, perched high along windswept bluffs overlooking the Atlantic next to the vintage Highland Lighthouse on Cape Cod.  This is not going to appear on anyone’s top ten courses in Massachusetts much less the northeast, yet if you are truly a student of the game this is a must play if you are on the Cape.

The original Highland House Golf Links was an adjunct to an ocean hotel and cottage resort operated for years by Isaac Small of Truro and his family.   After years of growing wear and tear the links were refurbished in 1955 by owner Hal Conklin.  In the 1960’s, when Congress approved President Kennedy’s Cape Cod National Seashore Act, Highland Links became Federal property leased to the Town of Truro.  This is now an inexpensive public golf course available for the pleasure of anyone visiting the northern end of Cape Cod. 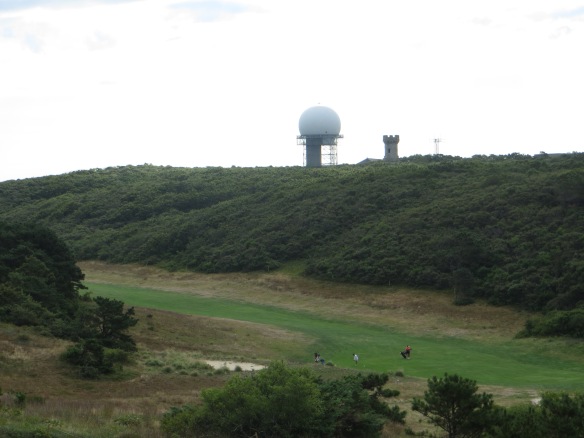 The second hole would feel at home anywhere in Scotland or Ireland.

Deep natural rough, Scottish broom, thick gorse and low bushes, hilly terrain with non-irrigated open fairways, and spectacular ocean views make this course a genuine links in the Scottish tradition.   Wind, weather, rock hard fairways, and high rough are always a factor at Highland Links. Add to this the up and down elevations and gently rolling fairways you will have a links golf experience that you will not soon forget. 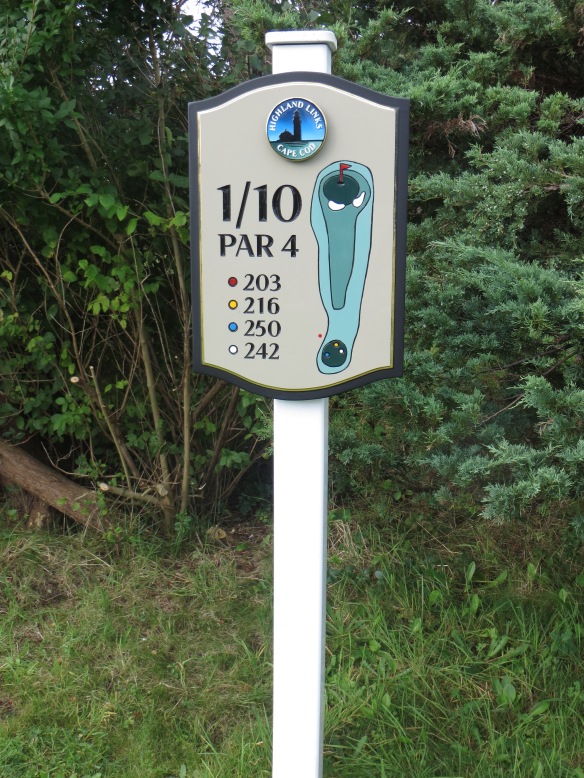 Each hole requires a second time around.

This is only a nine hole course but they have two sets of tees so you can make a second loop to get in the full eighteen.  I highly recommend you do that because the first time through there is a steep learning curve on how to play these holes successfully.   As you play the nine again from slightly different tees it is interesting that the men’s inward nine is 200 yards shorter while the women’s inward nine is 30 yards longer.  The second hole is a par 5 on the front and a much shorter par 4 on the back.  The fourth goes from a par 4 to a par 5 as the thirteenth.   With different teeing lines, the shorter distance on the second nine seems a harder round to the measure of par. 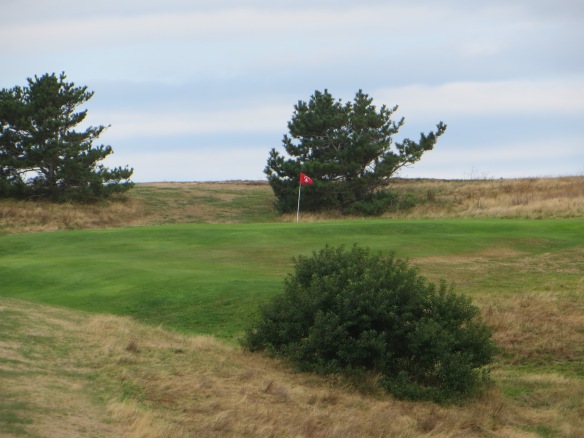 Elevation change and wind are constantly considered through your day.

If you are used to lush fairways and fair bounces you need to check your ego at the door of the golf shop.  This is golf the old way, rock hard fairways with existential bounces, small putting surfaces with angular fall offs, and serious slopes to navigate on the greens.  The wind will be a major influence so trajectory control and creative attack lines are called for.  If you have a quiver of links shots bring them with you because the ground is your friend and you will have to make some strong up and downs to play well here. 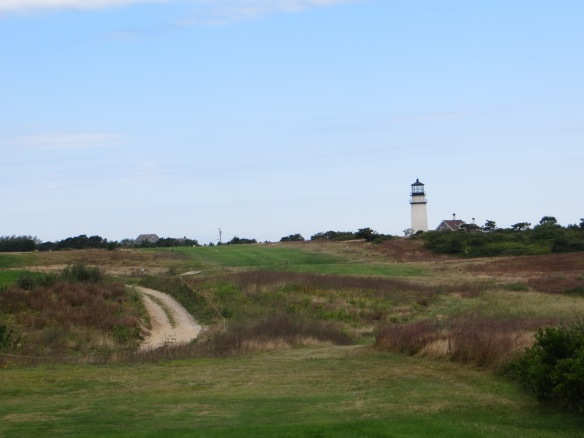 Full links drama unfolds before you on the drive at the Par 5 sixth.

The views on the high holes are just spectacular.  When you get to the tee box on six you are perched on a cliff about 400 yards above the ocean with a drop dead panoramic view worth a digital moment.  This place is not without a sense of humor.  There is a sign adjacent to this tee box on the walking path to the cliff that says, “No Ball Retrieving From Pond”.   You would need a grappling hook, lots of rope, and a lobster basket. 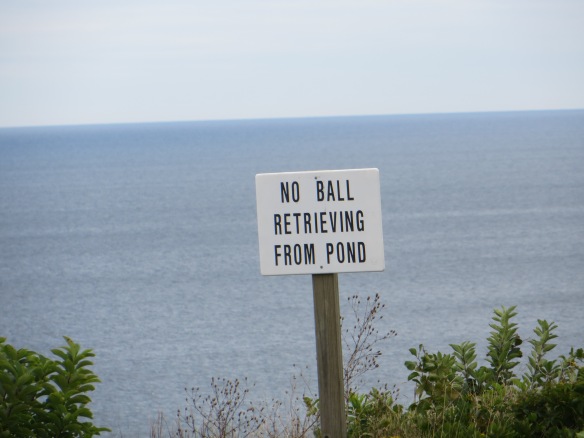 The Highland Lighthouse is prominent on the horizon through the round but never more spectacular then when it is the backdrop to the finishing par three on each nine.  In fact on the Truro Links website under “Directions”  they have: 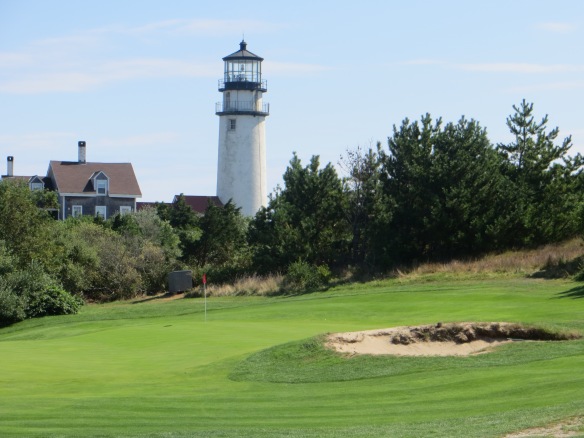 View at the Par 3 ninth……it does not get any better than this.

There are also two other curious architectural artifacts on the top of the dunes behind the second and third holes.The first is a globe that looks straight out of Epcot Center at Disneyworld.  It is an old FAA service dome that originally was used by the Air Force as a surveillance station during WW II.  Juxtaposed to it stands a 55-foot tall medieval looking granite tower on which you would expect to see Mel Gibson in full Braveheart garb wielding his sword and a shield.  This is the Jenny Lind Tower that was transplanted from Boston in 1927 as a gift to Truro from Harry Aldrich, a rich Boston attorney.  The tower was famous because Jenny Lind, the most famous singer in the world in 1850, delivered a concert from the top of it to a throng of people who could not fit into the auditorium she was scheduled to perform in at Boston and Maine’s Fitchburg Depot.  I am thinking that a young and impressionable Mr. Aldrich must have been in that crowd. 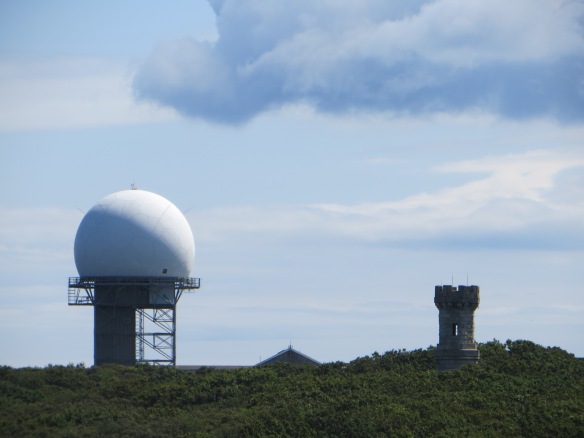 The embellishments on the horizon seem to span centuries.

What this place lacks in polished feature and comfort detail it more than makes up for in traditional links look and feel.  For those who love a rough and tumble British Isles golf experience there may be no better place on the east coast to find it than a double lap at Highland Links.

For more pictures click to review Postcard From Highland Links