Golfers can be a hardy bunch but even for them a trip to Brora is a bit of a trek.  For those making it the pilgrimage to Royal Dornoch, a mere three shot par five down the road, this is one worth adding to your itinerary.  You won’t venture much further North than this for a round of golf as it sits on the same latitude as Juneau, Alaska.  But what you will find is a delightful links layout that, as James Finegan says, “is packed with shot-making demands over as rewarding an expanse of duneland-every natural contour from moderate wrinkling to fantastic billowing-as any golfer could yearn for”.

The clubhouse has a commanding presence over the links below.

James Braid, a five-time Open Championship winner, laid this in the classic links in and out routine on a narrow strip of linksland just two holes wide.  The outward nine follow the contour of Kintradwell Bay with the ever present shore line on the right giving full view of the sea. 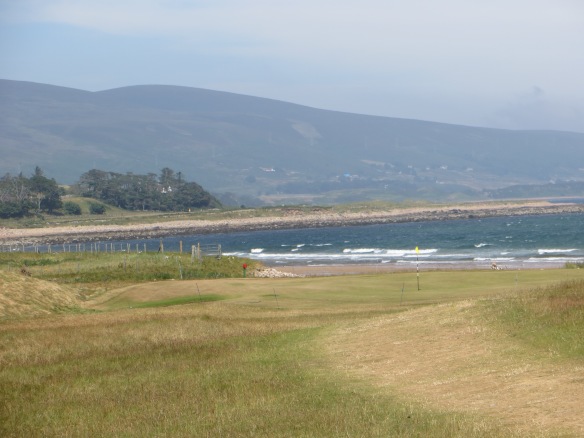 The Par 3 9th binds the sea and the stunning mountain backdrop to the links.

The exposure of the entire links to the sea makes for a serious wind effect almost every day.  Don’t be overconfident when you look at the yardages on this scorecard because the wind will notch up the challenges considerably. 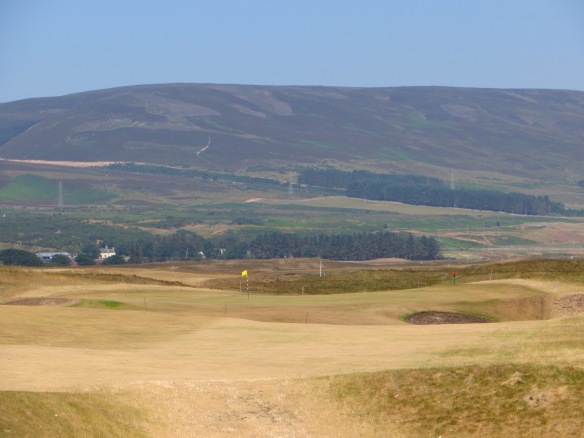 Looking down the third you take in the serene beauty of the Northern Highlands as a backdrop.

The tees and green are often nestled between the dunes which increases how unpredictable the ever-present breezes will be affecting the flight of your ball.  David Brice says “Brora is a character-filled layout, brimming over with personality and an obvious sense of humor.”  The variety of the holes with full links features will make you play all the shots in your repertoire.  Something worth noting was Braid’s routing  the four par threes each facing a different point on the compass as to insist that you must deal with all variations of the wind on any given day.

There are no mild bunkers on these links and they tie seamlessly into the greens.

One unusual aspect is the unpaid landscaping service of cows and sheep that wander the property greens (ergo the local rule that animal droppings are to be treated as casual water and hoof prints through the green are considered ground under repair).

The Toro sheep have a long standing agreement for lawn maintenance.

To keep the maintenance troops in check, they have electric fences around every green so pay attention as you enter the green complexes.  As Hugh Baillie says in his book on Brora, “It has been said that Brora golfers are instantly recognizable  wherever they play….they automatically lift a leg going on to a green”.

The electric fencing here at 13 is a hurdle you traverse into every green complex.

Much like Royal Dornoch Brora was a playground over 100 years ago for rich men and people with royal pedigree on their summer holidays.  One of the regular holiday visitors was the Duke of Sutherland who stayed at Dunrobin Castle north of Brora.  During a round when his Grace was apparently not on his “A” game his regular caddie, Slogger, when asked by the Duke on the 10th tee “What’s the line here?” he responded “For as much good as you’re doing here you’re as well to take the Inverness-Thurso railway line”.  Guessing that Slogger was losing the side bet of the day on his Grace’s play.    There is so much history to this place, it is the headquarters of the James Braid golfing Society whose members include the Australian Golfing Great, Peter Thomson, Peter Aliss, and Ben Crenshaw.

Sunset from the clubhouse gallery presents a true postcard moment.

Brora is a great day of windy links golf awaiting.  Make the effort to get there and you will not be disappointed.