Once again the USGA is on top over everything relevant to the preservation of the integrity of the game.  Bypassing lesser concerns about anchored putting, compliant ball aerodynamics, and nuclear ball speed off driver club faces, the USGA has introduced, after two years of exhaustive internal research and development, a new and improved version of the Stimpmeter. 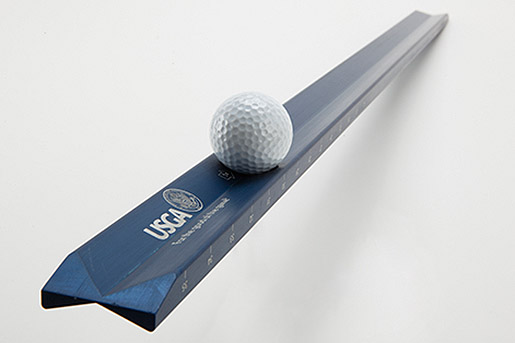 I for one will sleep better at night knowing that the powers that be have addressed this pressing problem.  You can read about this exciting development in John Paul Newport’s Wall Street Journal article called “Ta-Da! Stimpmeter Makeover”.

The original was a wooden version introduced in 1935 by Massachusett’s amateur champion Edward Stimpson in response to concerns over the unfair green speeds at the U.S. Open at Oakmont that year.  Separately, there is an unsubstantiated rumor that Mrs. Stimpson volunteered in a Depression soup kitchen and was looking for a better stirring implement for getting the lumps out of the morning oatmeal.

It was not until 1976  that Frank Thomas of the U.S.G.A. made the next big move changing the Stimpmeter from wood to aluminum and it became the standard device for measuring green speeds at U.S. Opens starting that year in Atlanta.  Within two years green superintendents around the country had adopted it for tweaking their putting surfaces and it has become a critical tool for bragging rights at high-end private facilities all over the country.

Fast forward another 34 years and the USGA brain trust correctly decided that enough was enough and made two critical improvements to sustain it’s relevance for generations to come.  First, they updated the color from drab green to a “dazzling USGA blue”.  Second, they added a second “starting hole” to accommodate measurements on greens that don’t have the required 10-12 foot flat run out for the original device.  This is a condition on many older severely undulating greens and the steep and segmented greens that are often the gift of wrath from designers today.

As a course superintendent you can order one of these from the USGA for only $110 (or 3 easy payments of $36.66).  If you act now the USGA will generously double your order sending you a second Stimpmeter for the back nine ABSOLUTELY FREE (just pay shipping and handling for the second device).

For a limited time, as an additional bonus, you will also get a 6 oz can of their “Green Renew” biodegradable green paint that cures pesky brown spots on closely mowed greens in seconds.  It comes in three different shades for Bent, Poa Annua, and Tifeagle Bermuda putting surfaces (please specify preferred color with order).

For those who share the “innate nerdiness” of USGA staff and you can review their instructional video below on the proper use of a Stimpmeter.  WARNING: This video is rated PG and is not appropriate for those without fossilized frontal lobes.

I only hope that the USGA has, in keeping with the trend of responsible and patriotic vendors, insisted that the current models are being “assembled in the U.S.A.”