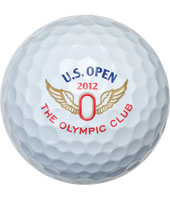 I know this is a stretch but allow me to fantasize for a moment and imagine what it would mean if a 17-year old was to win the 2012 U.S. Open at The Olympic Club.  This could be an accomplishment equal to “The Greatest Game Ever Played” 99 years later.  That day an unknown amateur, Francis Ouimet, at age 20, beat the renowned British professionals Harry Vardon and Ted Ray in a playoff to take the U.S. Open at Brookline and put American Golf on the radar scene for the first time.

Beau Hossler has proven over these last few days that he has the game and demeanor to compete at the top level at a very tender age but to actually win the big one while still in his teens is just inconceivable.  As to his name appearing atop the leader board on Friday for a couple of holes he said, “I was pretty excited about it, but then again I had another 40 holes …..you’ve got a long way to go, and you can’t get too wrapped up in where you’re at.”

On Saturday his goal remained, as it had been when he missed the cut in the U.S. Open at age 16 at Congressional last year, to be low amateur.  Then he did the unthinkable-shot even par 70, making bounce back birdies 4 times after making a bogey on this harrowing track, to maintain his position at 3 over within four shots of two former U.S. Open winners Jim Furyk and Graeme McDowell.

As a 17-year old maybe there is a bit of precociousness in his attitude but his goal has now changed because he actually believes he can win this golf tournament.  I know this is unlikely but if he somehow can continue this out of body experience he has been going through for three days and post a two under 68 on Sunday, it might just be good enough to earn Beau a Monday playoff date against a couple of seasoned professionals for this title.

How cool would that be.  Cooler than free dry cleaning-the one perk from this Open experience that Hossler thought was “pretty sweet”.

I don’t know about you but if Beau gets through the juggernaut first nine holes on Sunday within striking distance of the leaders I will hanging on his every swing continuing to imagine the unthinkable.

My bet is Mark Frost, who made a movie about Ouimet’s startling accomplishment in 1913 at Brookline, will be having similar thoughts.  I am pretty sure that Beau has seen the movie a few times and is very familiar with the storyline.