At the 2011 PGA Show in Orlando the buzz around the place was about the new distance line of TaylorMade Rocketballz drivers, fairway metals, and hybrids.  The notion was circulating that TaylorMade had trumped the USGA and the rest of the industry with the introduction of a power slot behind the face of the latter two categories resulting in an enhanced trampoline effect which would have the ball rocketing off the clubface.  Notwithstanding that Adams Golf had introduced this same idea last year, it was the bold marketing of the “Ballz” line that had started a wind-aided brush fire across the convention center. 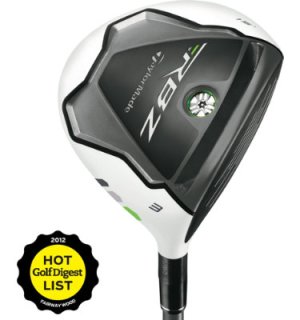 The driver cannot use this same power slot since the COR (the measured trampoline effect) for drivers has already hit it’s max, but they did refashion the clubhead aerodynamics to increase speed and the inside of the head to get a low and forward center of gravity to help get the optimal launch and lower the ball spin to increase the carry distance.

So for me, a guy with a driver head speed of 89 with a 25 mph wind at my back, it just was too much to resist sampling this reality and seeing for myself if there was “another 15” waiting to be garnered.  The results of my personal testing were startling and a visit to my club fitting guru at Golf Care Center confirmed it so a new troika of Rocketballz Driver, Three-Wood, and Five Wood are now in my walking bag.  You can say, in respectful deference to the late Davey Jones, “I’m A Believer”.

Simply stated, with the benefit of a launch monitor, comparing the potential replacements head-to-head to my existing hardware the key numbers of ball speed, launch angle, total spin, and carry distance, there was little doubt I would gain significant yardage on every club.

The key is the combination of correct launch angle, faster ball speed off the face, and lower spin rate which results in less resistance in the air and further carry.  Further, and this was evident when I got them into the field, the lower spin rate means more roll out on the ground.  It is observable to me that all three of these clubs generate shots with more ground enthusiasm which means more yards when the turf is dry and fast.

In a recent Golf World magazine article “Out to Launch”, Mike Stachura talked extensively about the “hunger for extra yards” that has swept across the professional ranks.  For them the extra yards pay in money list results.  He says, “Last year the average rank on the money list of the top 30 in driving distance was 67th, while the average rank for the bottom 30 was 119th”.  Little question even historically less brawny guys like Mark Wilson and Justin Leonard are hawking longer distances by tweaking their equipment with the newest technology.

And there is little doubt the manufacturers can deliver it.  The sophistication of launch monitors and accompanying analytic software,  introduction of adjustable drivers, greater specificity in shaft engineering, technological advances in head design, and even better understanding of swing mechanics make it easier than ever for pros and schlubs alike to get in on the distance buffet.  It is all about optimizing launch conditions-ball speed off the face, backspin, and launch angle-that can produce extra yardage.

In this Golf World article Steve Ball, a top rated instructor and club fitter from Oklahoma city says, “I have about 70 percent of my fits pick up at least 25 yards”.

I don’t know about you but this is pretty hard to ignore.  So Endora, Samantha, and Tabatha, as I have affectionately named them, will be twitching their noses for extra yardage for me this coming year and I am damn excited about it.